One thing I have come to appreciate in Texas is the dedication to preserving native plants, especially the wildflowers that make the prairie so distinctive and beautiful.
The Mueller development (just south of my neighborhood) used to be the Austin Airport. When it moved further south some 20 years ago, the land sat vacant for a while, but was purchased with the goal of creating an ambitious housing development with mixed use. I feel so lucky to have purchased a home a  mile away, in easy biking distance (and occasionally a long walk) to restaurants, movie theaters, swimming pools, and beautiful parks. There are a series of water retention ponds on the southern end of the development that have been planted with native wildflowers and trees, and it's practically a little nature preserve with all the wonderful birds, insects, and wildlife attracted to the little area. 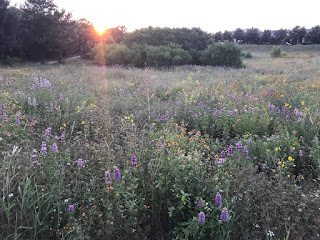 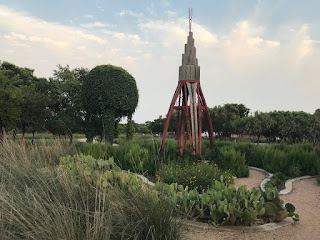 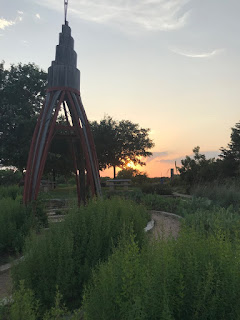 Yard of the Month!

I won Yard of the Month for my neighborhood. To prepare for the honor, I cleaned up the front a bit, primarily focusing on the edging of the garden beds to create nicer, neater lines. I'm going to work on edging the backyard flower beds next. I planted gulf muhly grass in the mulched areas between the agave and the blue mistflower bushes. It's taken a while for them to get comfy in the spot, but I'm hoping in a year or so they will fully root and flourish there. I've tried gulf muhly a couple of different places, but I've struggled with them for some reason - maybe not enough drainage, or water, or sun. We'll see which ones end up doing the best.
The Gregg's mistflower is really starting to fill in nicely around the pecan tree. Another season or so and I bet the whole ring will be filled in. I can't wait for all the monarchs and queens to visit in the fall. 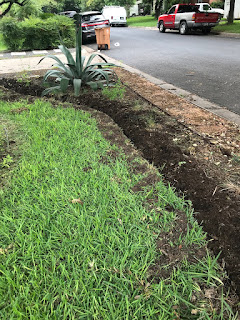 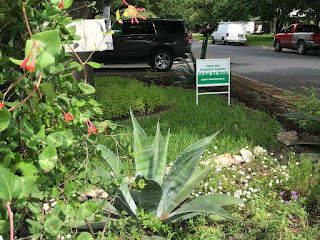 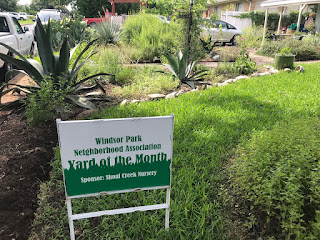 I'm placing these videos here so I can go back and reference them. We had quite a few torrential downpours this spring - wonderful for the plants, but as I watched the torrents sweep across my yard, I wondered whether I can do something to manage the rain flow a little better. Here are images from the front yard.
The water sweeps down the slope from my neighbors' property, floods the little gravel path I created and creates a puddle on our walkway. I'm thinking I could dig out the garden on the left side of the picture, build a small swale to encourage water to drain off the sidewalk. This is one summer project I plan to attempt. 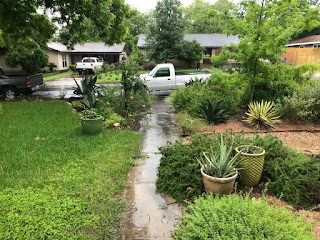 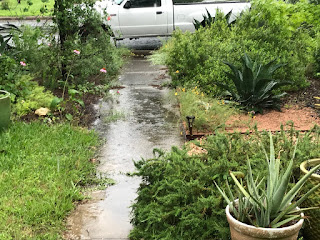 In the backyard, this is the scene. The gutters are not very effective (they might need to be cleaned out as well). But they just haven't seemed to work well since they were installed. So, right next the house we get a giant puddle. Again, I'm thinking I could dig out a swale to carry water away from the house, and down toward the side garden by the fence. 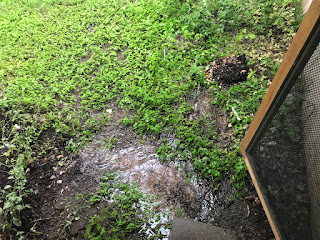 Here are some more photos of the side of the backyard. There used to be several indifferent seeming irises and daffodils back here. I dug up several, and meant to replant them, but forgot. I don't know if there's too much shade, but many of them didn't bloom. So I dug them up, and it's probably too late to replant them. I hear bulbs can't stay out of the ground for too long. 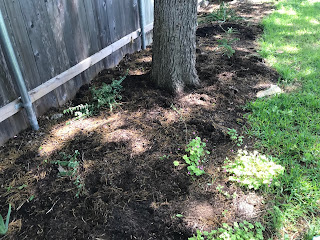 Anyway, I put cardboard and mulch down to facilitate creating a new garden scenario back here. It's not super well-planned. It's quite shady, with some late afternoon sun. I placed some yellow Indian grass; we'll see how that does. I transplanted some coral berry from the other side of the back yard (see photo below). That stuff is a great groundcover for a shady spot, and it's spread all over my woodland, so I had to dig a lot up. I tried replanting over here, but it's not looking super perky, even after the 4 days straight of rain. 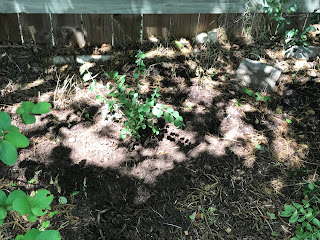 I also transplanted turk's cap, which grows like gangbusters, so it'll probably take over within the next two years. I also transplanted a tropical sage, which was super easy to transplant, and two yellow columbines, only one of which survived. The rain def helped there.

I bought a Mexican honeysuckle and a beauty berry. I guess I'm aiming for a garden grounded with several large shrubs, and salvia, coral berry and twist leaf yucca for ground cover. It'll probably come out fairly eclectic, but I guess that's okay. That's more or less what I did in the front yard, and I'm enjoying that a lot. 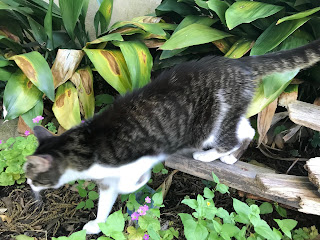 I started placing the flagstones in the garden yesterday, once all the rain stopped and the sun came out. Here's my progress so far - about 1/3 complete. I understand the meaning of back breaking labor. 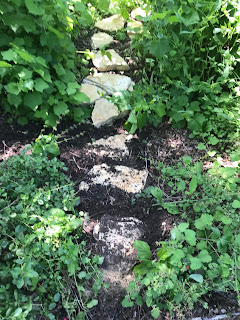 It was so muddy still, the stones are covered in dirt. It is hard getting those stones in place, and keep them from wobbling.
The evening was so nice, and we had extra wood from all the pruning we've done, so we built a fire in our fire pit. Here's the view back towards the house with the gorgeous sunset clouds, framed by pecan trees. 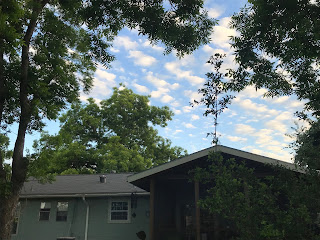 Ode to the late afternoon sun.

The light and shadow
play with the colors, highlight the pinks the blues the yellows
rising above green foliage,
yearning for the light and heat.
The sun and the flowers
reach for each other. 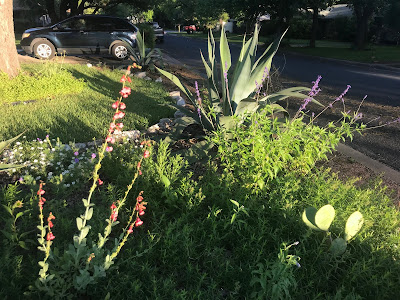 You can see my woodland in the last post. I wanted to make the back of the woodland more accessible, so I can weed and check in on the plants back there, as well as create a view to the beauty berry I planted two years ago (which was invisible in the earlier blog post).
So, I hacked away at the Turks cap and widow's tears, along with pruning back some of the rough leaf dogwood suckers that have grown in (buyer beware - it's a beautiful tree, but be ready for a thicket of suckers if you're not an avid and aggressive weeder).
You can see how I created some space here: 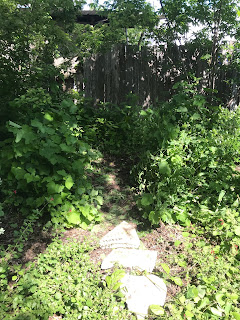 It's hard to tell in the image below, but there's a patio there (really just a concrete foundation from an old shed). It's covered in the plants I pulled, so it looks a little weird. 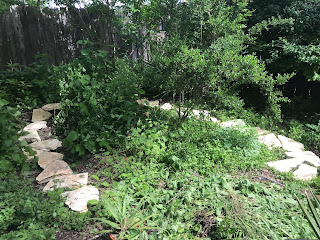 I haven't actually laid the stone in the ground yet. Still playing around with the design, plus it'll take some work to get the stone dug in. I think once it's properly laid and some of the plants grow back in, it'll have a fairly natural look.


Finally, here's Grady, nestled in her favorite spot in the front yard, right in the sun. 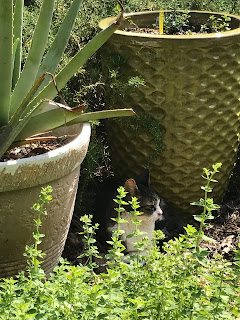 Meghan D
My husband and I have moved to many different places. I first discovered my love of gardening in Virginia where my husband and I owned our first home. We moved overseas for a few years, then returned to the U.S. moving to Austin, TX. Once we bought our home here I set to work immediately cultivating a garden of native plants out of our yard of grass. It's going to be a long work in progress, as I'm still learning more and more about plants native to Texas and gardening in the heat and drought.